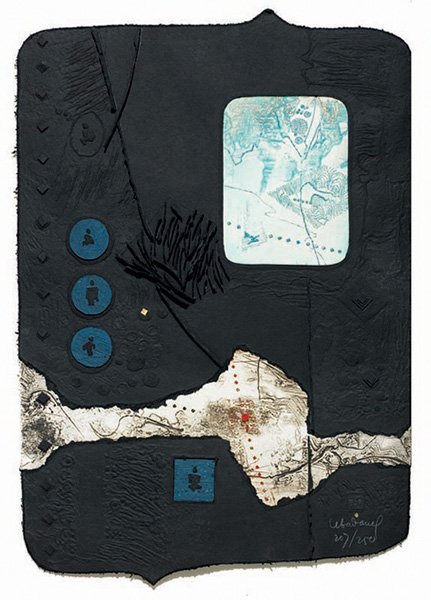 In 1985, Lebadang started on what was undoubtedly to be his major work, the series of “Espaces” (Spaces). There are works on paper combining various techniques by using collage and superimposition, mid way between sculptures and bas-relief, like a synthesis reaching beyond these two forms of expression. Lebadang uses paper made especially for him at the Moulin de Larroque (the Laroque Mill) at Couze, in Dordogne, a pure handmade rag paper extremely thick, which he tears up by hand and joins together in superimposed layers so as to obtain a landscape with “relief”, a landscape seen from the sky. The “Espaces” (Spaces) are monochrome, white or black. At that time he is interested in the aerial views of the geoglyphs of Nazca by the American photographer Marilyn Bridges. He sees in them a bond between man and the Cosmos.

Subsequently, Lebadang inserted into his “Espaces” (Spaces) relief engravings enhanced by watercolour. In 1995, the “Espaces” became mobiles painted on both sides and hung up. The basic material consists of paper made more compact by collage, superimposition and the addition of sand. The shapes are cut out and painted with figures or hollow shape.

Lebadang must be an extra terrestrial 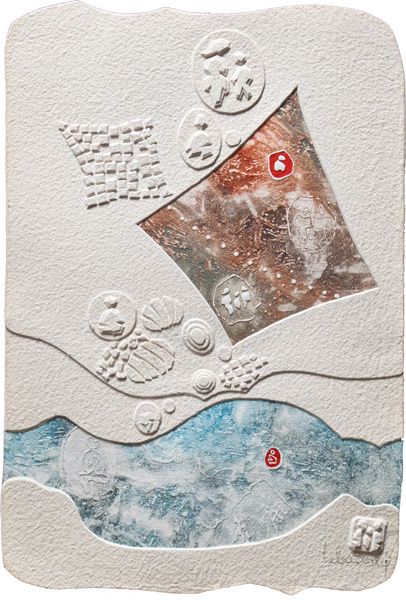 […] Lebadang always seems to turn up where one least expects him, thanks to some magic sleight-of-hand which renders him a supernatural being.

Open spaces that one observes from height, where the hills and hollows of the terrain remind us the “Terra lncognita” of the first explorers.

As if this where the kingdom of spirits, the refuge of the memory of the dead.

Upon first glance, a work where the eye sweeps across glacial and desert landscapes, where only an expanse of blue makes us suspect the presence of a lake or a glacier.

Between the serenity and the silence before the storm.

Lebadang could be situated in this interface, where as a demiurge, along with art and malignity, plays with ideas, materials and plans. Master of words and things, with a wisdom that appears constantly in filigrane in the sobriety of his art, Lebadang seems to land — and the term is not to strong — on a space that is waiting to be shaped.

The complete concordance between the small-scale realization which the experts would call a model and the realization to scale a park, practically makes of it an “epure”, a working drawing.

Lebadang is becoming the architect of nature. And this precisely through architecture that natural space becomes common space where in lie the significant reperes (indicators) of existence and co-existence.

And Lebadang’s work has the power, the strength to restore, three-dimensionnaly, this kind of volumes which the eye and hand desire to caress, to invest.

So why not immerse oneself completely and totally into the work through the imaginary. A nature of planetary dimension where it is good to lounge. As if the model, the epure. the drawing which we mentionned should accede to one ultimate fate — the art in which we live, walk, laugh, and cry.

Macrocosm and microcosm find themselves united by the magic of senses.

Lebadang, without doubt, is a man of memory, of geological memory.

When he chooses the rag paper, with the precision of a master craftsman, he knows he will be working pure cellulose, completely exempt of lignin, in order to fashion, like a great architect, an open space whose ambiguity will lie in its naturo-cultural being.

He rediscovers the strata, craters, synclines and anticlines that time has fashioned but which go largely unnoticed « in situ » without remarks.

One must see in all of this a kind of return to the sources, a sort of antediluvian point of view when the nature was art, where form was cosmic resonance.

What does it matter if the strata be in schist or cellulose? There is a kind of plastic genealogy, an accumulation of « memories ».

To transpose from a primary emotion, a small-scale model into a realization spanning several hectares, as Lebadang whishes to do, shows what extent art, as perceived by the artist, is an integral part of man.

And this is an ancient myth. It is finally penetrating matter in order to experience it, to dwell within it. It is a rediscovery of the common feeling that man is, at the same time an universe and in the universe. It is being a giant and a Lilliputian.

Otherwise, Lebadang’s studio is something as a sorcerer’s apprentice.

The pages — I mean strata — of black, red, or blue paper, some sort of large tectonic sheets, at his will, are creeping and sliding on the floor of his studio.

He reconstructs miniatures landscapes with an almost pathological thirst to avoid and take off the excess He wants to return to a primary, or more precisely, primordial state.

That state which everyone is searching for peace and every philosopher creates for himself and which is called “the interior desert”.

Lebadang is a wise man, and one who knows what is not made with time is neither retained by it.

An so he makes, or rather reconstructs, landscapes and continents in the image of the models he assembles.

As he says himself, how he feels it, it is the eternal cycle of light and life.

It is a work which, from every fragment of cellulose/schist breathes deeply light and life.

The creative act is affirmed in its all plenitude.

François Nédellec
(Curator of the Museum of La Castre, Cannes)