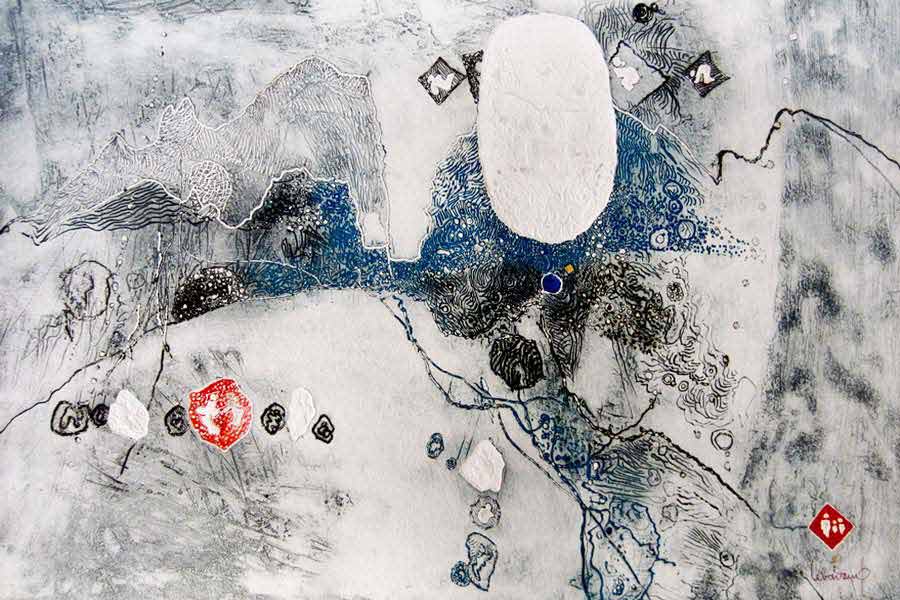 Lê Bá Dang (Lê, his surname, Bá, his middle name and Đảng, his given name), under his artist’s name Lebadang, was born on 27 June 1921 at Bich La Dông (in Quang Tri, near Huê, the former imperial capital of Vietnam) and died on 7 March 2015 in Paris, was a Vietnamese painter, engraver and sculptor and was naturalized in France in 1980.

He spent the major part of his life in France, with several stays in the United States and in Japan.

His work comprises, after his studies at the École des beaux-arts de Toulouse (Fine Arts School of Toulouse) from 1942 to 1948, his first drawings, paintings, lithographs and prints representing classical themes. These were followed from 1955 onwards by works that were critically acclaimed. In 1966, the Cincinnati Art Museum held his first solo exhibition in the United States. He created, in 1985, his first Espaces (Spaces), paper works combining various techniques using collage and superimposition, mid way between sculptures and bas-reliefs, like a synthesis reaching beyond these two forms of expression.

In 1994, the French government admitted him as « Chevalier de l’ordre des Arts et des Lettres » (Knight of the Order of Arts and Literature). He was awarded several distinctions in the United States, in England and in Vietnam. He was commissioned to release the Academician’s Sword for Professor Jacques Ruffié. He designed the set and costumes of the opera My Châu – Trong Thuy at the Opera de Paris in 1977. He published several portfolios of lithographs, notably Huit chevaux (Eight Horses) in 1964, his first portfolio done in relief, without colours nor ink, on the poems and calligraphy of Chou Ling. He designed sculptures for the glassmaker Daum and created a large Espace (Space) in the quarries of the “Cathédrale d’Images” (Cathedral of Images) at Les Baux-de-Provence in France.

In Vietnam, in 2006, in the presence of the artist, the city of Huê and the authorities of the province of Thùa Thiên-Huê inaugurated the Fondation d’Art Lebadang (Art Foundation Lebadang) in Huê, which permanently keeps and exhibits more than 400 works by the artist representing more than 70 years of creative endeavour.

His works can be found in numerous private collections, notably in the United States, in Japan and in France.

In 2015, his wife, Myshu Nguyên – Lê, made a donation to the Cernuschi Museum (Museum of the city of Paris for the Arts of Asia) of an important set of works on paper reflecting the artist’s extensive research and technical innovations in the field of printmaking. The donation includes 33 prints, a portfolio of 17 lithographs, 2 watercolours and 2 paintings.